This past Christmas, my husband and I went away like we usually would for our Christmas and New Years break. Normally, I would stick to somewhat of a routine, because being a strong type A, I can’t help it lol. Plus, its just part of my lifestyle; so why wouldn’t I work out while vacationing.

But I also like having something to look forward to, other than the beach. So, I was expecting to do my usual morning cardio and workout and in the afternoon when my husband would hit the iron, I could either join him or lay on the beach. 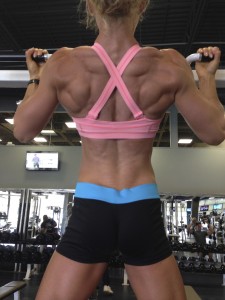 Little did I know, I was being challenged. And for those who know me, when it comes to training, I’ll never say no to a challenge. I just love pushing my body and seeing what I can do, so I knew I couldn’t say no to this (despite the pain I knew was to come).
It was a daily 50 pull-up workout. We would alternate sets; one day he would start with reps to failure, then I’d go. We would switch our grip just to get more variety and to keep it interesting. Here’s what we did.

Day 1-
After a few minute warmup of some band pull aparts, we’d start the workout. We started with two sets of 10, and then slowly the reps dropped from 9-7 or so. Not bad for day one. After we finished our pull-ups, we did a set of isometric grip holds using the cable machine. We wanted it to be fair so we calculated the weight based on a percentage of our body weight. Since the weight stack wasn’t quite 50% of my husbands weight, we calculated our numbers to be 47%. He beat me, I got 35 seconds; he got 48 seconds.

Day 2-
To make it harder on ourselves (I guess we figured why not succumb to more pain😝), we threw in push ups (10) in between each set. The pull ups started better than yesterday, but by the time we reached the midpoint (25 or so pull-ups), our strength started to dwindle a bit more than yesterday. We did a couple of sets of 6.

Day 3-
We continued super setting another muscle group into the mix. Today was shoulders. We alternated between 4 movements (I call it Thibs four-plex since a well known strength coach, Christian Thibaudeau was the first to demonstrate this). The shoulder exercises basically targeted the front and side delts (we did 10 reps per set). Today wasn’t bad for fatigue; we kept up at a decent pace and we were done in 40 minutes or so.

Day 4-
Today we targeted our triceps with a seated machine dip. We kept the reps higher (15), just to keep the blood flowing and lessen the strain on the joints. I wanted to see if we kept some juice in the tank with our pull ups (not going to failure every set), would we maintain our strength further into the workout.
We tried doing sets of 5 until we got to 40, and then attempted to finish with a solid set of 10 (sometimes the nervous system will produce an over-reactive response where you feel stronger as you go further into the workout). It didn’t happen😳 we were stuck doing two more sets; 7 and 3.

Day 5-
Back to the push-ups, this time we kept the reps higher, like yesterday (15). I noticed my power was better. I kept a good tempo throughout each set and didn’t slow down my speed in any of the sets. The pull-ups were getting hard, but we went back to our sets to failure and ranged from 6-10. It was a good workout.

Day 6-
My elbow joints were achy, my lats were sore as we headed into the weight room. This wasn’t going to be a fun one. But, we had a commitment to follow through until the end and I wasn’t going to give up. We went back to shoulders, this time alternating 20 reps of standing lateral raises with bent over lateral raises (to hit a bit more side and rear delts). My delts were on fire by the second set, but it felt pretty good to get a good workout with just a couple of exercises and in a relatively short time.

Day 7-
This was a great day, or should I say a PR (personal record day) day times 2! I hit 12 reps for my first two sets and was pretty surprised and elated, knowing I would be done in less overall sets lol. We super settled with dips again; this time I switched it up to do the same number as my pull-up set. So there were a few sets of 6-7 reps, but most ranged between 9-12.

Day 8-
Today (New Years Eve) is the last day of our challenge. As I’m writing this now, it’s morning and we won’t be doing them until mid afternoon, before supper. Despite dreading it before starting all those workouts, I found I actually enjoyed it once we started. I think I may implement this more often from now on. After all, a strong and defined back is a sexy back, don’t you think?😉

The last pull-up workout was probably the hardest even though we knew it was our last and tomorrow would be a rest day. I think our muscles were just done and fighting every rep lol. It was back to push-ups as our alternate exercise. I switched between narrow position (to hit the triceps more) with regular ones; 15 reps each set.
I started off weaker than usual – just got 7. I knew I’d have to do a power set (more explosive if I could muster enough power in me) or else this workout was going to be very long (plus that meant all those extra push-ups each time). I got 13 for set 2 which made my day but made my muscles scream to stop. I ignored them and did a set of 6, two sets of 7, leaving me with 10 to finish.
I was getting wiped from it all, even the push-ups so I gave myself an extra minute rest before the last set. I knew I could get those 10 in, if I gave my nervous system that little extra rest and did another power set (or at least try). I got the 10 done, and followed through with the push-ups.

It felt great to have a plan while vacationing. Often times, I would just train at maybe 70-75% intensity and to a degree, play around with the equipment. It was nice to still get some good workouts in while feasting on delicious (and higher caloried) foods.