If you’re like most people who train at a gym, you’ll probably find there will be at least one thing that irks you on when dealing with proper gym etiquette. I know in some cases people just don’t know what they should be doing to be considerate of the other gym-goers. Thats why Im writing this. And for those don’t care, I guess we just ignore them and hope one day they’ll figure out the rules.

1. Using 2 or more pieces of equipment:
This is okay to do, but there’s a couple of things to consider. If you’re using a couple of pieces of equipment, then try to have them relatively close to each other (if possible), put a water bottle or towel, or something on both pieces so others know (or should know) its being used.
Another point about this…
Say, if you’re doing your sets and having your break and someone wants to use the one machine; you can let them work in with you. Tell them that you’re still using it but they can work in with you. Usually they will do their set and wait until you’ve finished yours before they do their next set. They may even put the weight back to what you had it set at.

2. Getting into a space that is directly in front of someone else whose clearly using the mirror during their set (which is normal and fine; its good to check form):
You want to use the bench that sits directly in front of the guy doing lateral raises. What do you do, or should do? If you’re at LA Fitness then you can’t move the bench (which is one the most annoying things about that place) Who bolts benches into the floors? Sorry had to rant about this one. You could wait until he’s done his set, then do yours. Or find another bench to use. Its the nice thing to do. 🙂 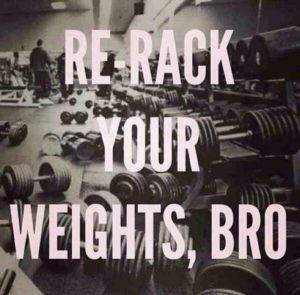 3. Putting weights away..
Probably the biggest pet peeve is when people (usually the young guys who have something to prove and no legs to show for it) load up a bar with 3-4 plates/side, knowing you’re about to use it right after them (because you politely asked, “how many sets do you have left?”), and they just walk away without putting any of the weights away. Arghh!…You can do one of two things. Ask them if they’re going to put their weights away OR just do it yourself, and think, ‘a little more bicep work won’t hurt me’, and smile to yourself 😉

4. Cleaning equipment after use:
This should go without saying, if you sweat it all up; then you should clean it off for the next person. Not only is there so many random germs and bacteria everywhere, but you probably wouldn’t like using a bench that had dried up sweat and dirt on it. 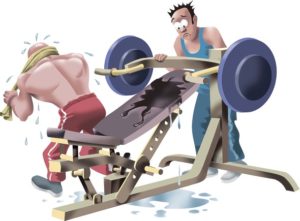 5. Leaving a machine to use the washroom or go to the water fountain:
Leave something (i.e. water bottle on the bench, not near it – some people don’t get it and you want to be as blatant as possible) on the machine or bench. If they still don’t get it and try to use your bench when you return, you can (politely though it might be hard when they ‘should’ know better), just let them know that you’re still using the bench and that’s why your water bottle was still sitting on it. And don’t forget to 🙂

6. Giving advice when not asked…
I would love to give random tidbits of advice to people who could use it, but let’s face it, most people don’t appreciate it even if you’re wholeheartedly just trying to help someone out. Plus, I’d probably be there all day if I were to do that – (there goes my workout! lol). However, if someone asks for advice or how to set up a machine, why not help them out. We all started at the same place once upon a time.

7. Don’t stare, whether its a pretty gal or someone doing a ridiculous exercise…
Its just not polite to stare. Most people will notice it and its very uncomfortable to be on the receiving end of a starer (is that such a word? anyways, you know what I mean). I like to think of the mantra, ‘Treat others as you would like to be treated’. 🙂

8. Its okay to grunt,…when you’re lifting heavy and actually struggling
It helps to grunt when you’re trying to press a ton of weight over your head or deadlift a 1RM. Research shows it helps elicit more force and further engage the nervous system. Think Serena Williams playing tennis, there’s a reason behind it. Just don’t be a show off Shelby and grunt during your band pull-aparts warm up.

9. In the change room, when using the benches for your gym bag, etc:
If someone comes in and takes his/her stuff out a nearby locker (and clearly would be using the same bench as you), then please move your stuff to one side of the bench so you can ‘share’ the space. Don’t be a Harry the Hog; no one likes that.

I hope these tips give you an idea of what is considered gym-appropriate manners when training in a public place. And if you think a friend can benefit from any of these tips, please share this with them. After all, sharing is caring.