Lately I’ve been playing around with using three simple products as a pre-workout formulation, and noticed it has increased my energy and fat burning potential triple-fold!  About 20 minutes before training, I take a caffeine pill, 3 grams of taurine (in my bcaa drink), and 1500 mg of l-carnitine. If you’re unfamiliar with these products or why use them, here’s the explanation: 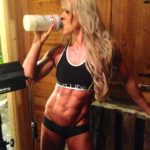 Combined these three supplements can greatly impact your efforts in the gym. I like to use taurine in powder form and put that in my bcaa drink (amino acids that feed my muscles while training, they do not cause an insulin response despite tasting like juice!), and I take the caffeine and carnotite in pill form.

Try this out and let me know what you think! No need to buy those expensive pre-workout formulas when all you need sometimes is a simple mix.