Kent is one of our clients who came to us last February after getting frustrated that his usual ‘juicing diet’ didn’t work this time to lose the weight he had gained. He was in a bad car accident in the previous October and was limited in his activity for many weeks, hence part of his weight gain. The junk food and ice cream didn’t help either. Because he would drive by our gym every day, he figured to reach out and get coaching and a nutrition plan from us. And was he ever motivated; after suggesting that he start with 3-4 training sessions/week, he requested that we do 5. Then after a few days, he asked for 7, two sessions /day on Tuesdays & Thursdays. Pretty intense but we made sure to plan his volume, intensity, and training to prevent overtraining and any chances of injury.

His results have been amazing to say the least. He lost 60 lbs in just over 5 months, and his health, productivity, and overall outlook on life is better.

He’s had numerous concussions where his memory recall, and focus wasn’t at his peak; but after just a few weeks of working out and eating healthier (a food plan customized for his current weight; goal weight; health background, etc), he was able to stay attentive to his workload for longer periods and be more productive. 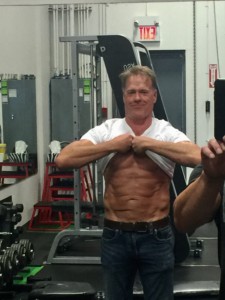 His doctor said he would never be able to dive, and he’s actually one of a short list who do extreme depth diving. He told him he would never be able to golf unless he used a cart; Kent walks more now than he did over 20 years ago. His doctor also said he wouldn’t be able to squat and he can leg press over 650 lbs for a good 8-10 repetitions. Sometimes it’s good to seek a second opinion and find out what is possible if you put the work in.

And to boot, he’s 56 years old and now has a full set of 6 pack abs; something he’s never had before and never thought he would.